The Anaklia Deep Water Port Project: The Year 2020 in Review

The development of a modern deep water commercial port at Anaklia has long been an aspiration for Georgians, not just because of the enormous boost it would provide to the nation’s economy, but also because its development would position Georgia as a strategic transit hub for commerce between Asia and Europe, strengthening Georgia’s independence and stature in the world economy. The Anaklia project has attracted the interest of political and diplomatic leaders from the U.S. to China who recognize its geopolitical importance. The project is so important to Georgia that in its “Year in Review”1 report, the media outlet civil.ge called out the developments surrounding the project as amongst the most important news topics of the year 2020. 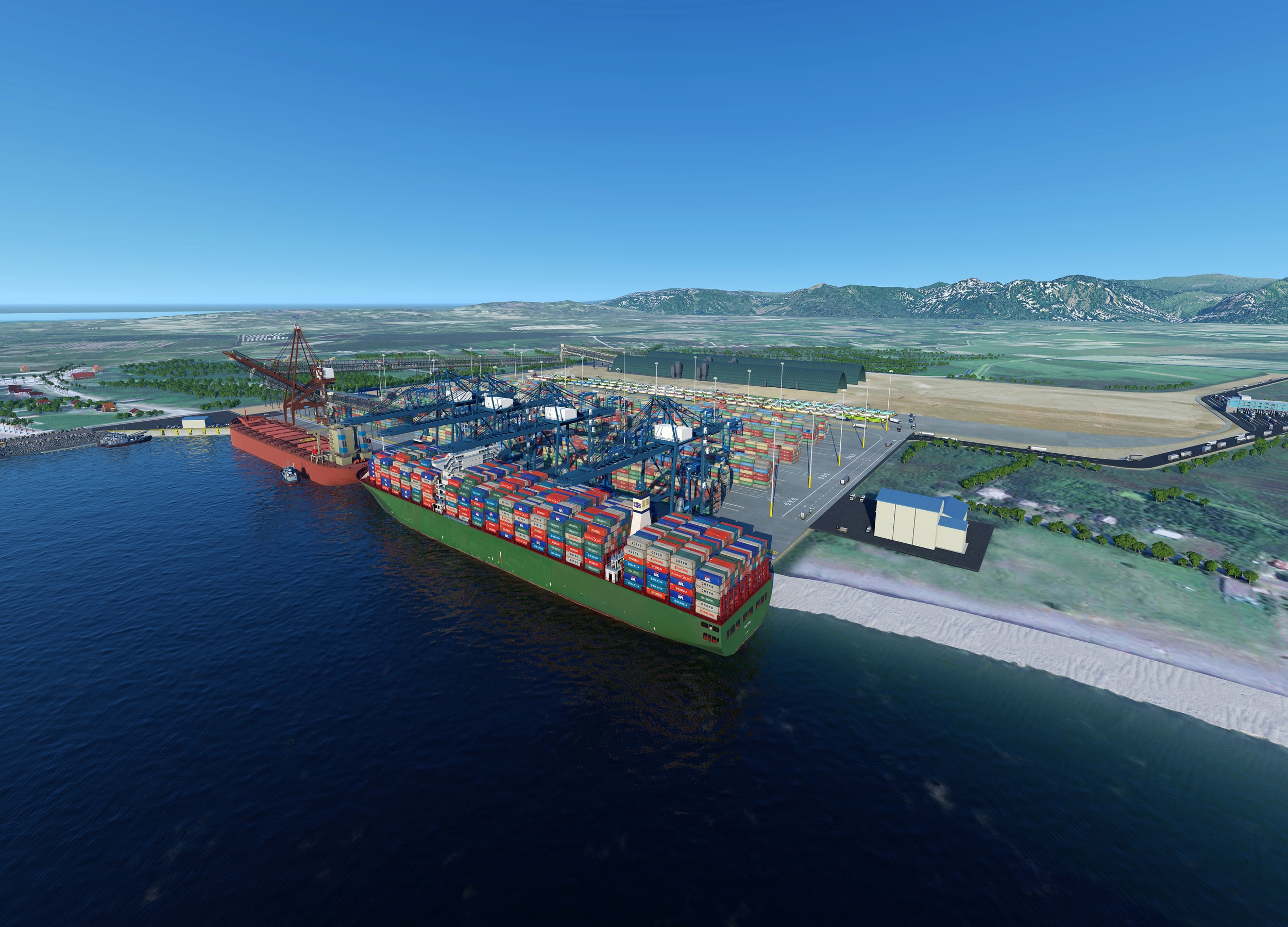 Artist’s rendering of Phase 1 of the 9-Phase Project

The year 2020 began in an ominous way for the Anaklia Port Project, with the Georgian Government’s unlawful termination of the investment agreement with the project developers, Anaklia Development Consortium (ADC), after the discouraging international investors and lenders from supporting the project. In response, after multiple attempts to reengage with the Georgian Government to find new investors and continue project development – all of which were refused – ADC and a principal investor filed arbitration claims against Georgia. Political leaders and analysts from the E.U. and United States responded with criticism of the Georgian Government and encouraged it to push forward with the project. During this period there were widespread reports that the Government had bowed to pressure from the ruling party worried about Russian influence. Other reports suggested the Government was influenced by associates within the ruling party with financial interests related to a competing port site, even though that site – Poti – was shown to be inadequate with respect to its overall size and potential capacity. The Georgian Government reacted to this criticism by reaffirming its commitment to the Anaklia Port Project. However, questions remain whether the Government is simply using political rhetoric to assuage concerned parties (including the U.S., E.U. and U.K.) and delay the project further, or whether 2 it truly wants to proceed with the project. Its actions in 2021 will answer this question. With the self-professed departure of Georgian Dream party leader Bidzina Ivanishvili – who has been reported to be a principal opponent of the Anaklia Project – from politics, it is hoped that will be the catalyst to restore Government support for the project and renewed enthusiasm for its completion. As Georgia enters 2021, all look to the Government to reconsider its intransigence and carry through with its commitments and choose the smartest, most expeditious path to turning the Anaklia Deep Water Port Project from a dream to reality. (Both the Foreign Policy Research Institute2 and PortsEurope3 have published detailed reports on the Anaklia Deep Water Port Project and the challenges of completing it.)

The desire for a deep water port for Georgia, and specifically at Anaklia, goes back many decades. The attraction was obvious: Georgia lies at the crossroads of Europe and Asia, on the east coast of the Black Sea. It is a gateway for Asia to Europe and for Europe to Asia, offering the potential to be a major transit hub.

The attraction of Anaklia versus all other possible port locations in Georgia is simple: it is the only Georgian location suitable for a deep water port; necessary to accommodate the large 10,000 TEU container ships that would enable efficient transit of cargo through the region. It is also the only port location in Georgia that can accommodate a large Special Economic Zone, which would exponentially increase the value added by the port; enabling manufacturing, logistics, warehousing, and other activities onshore, and ameliorating the country’s persistent balance of payments and unemployment challenges. Aerial Rendering of Phase 1 of Anaklia Deep Water Port Following a tender process, in 2016 the Government of Georgia awarded the contract to develop the Anaklia project to the Anaklia Development Consortium, a group of Georgia and western investors brought together to develop and operate the nine-phase project before turning it over to the State of Georgia following a 52-year concession period. The economic benefits for Georgia are considerable: • The Anaklia Port Project and the associated Anaklia City Special Economic Zone would provide direct and indirect employment of up to 26,000 over the 20-year concession period of the project. 3 https://www.portseurope.com/analysis-georgiahelped-russia-sink-anaklia-deep-sea-port-project-canpoti-replace-it/ 3 • A 1.1% annual growth to Georgia’s gross domestic product (GDP) and GEL 2.8 billion of additional economic value • Over the duration of the concession, the royalties to be paid by ADC to the Government are estimated to be GEL 1.6 billion. • Up to GEL 120 million per year of additional tax revenues. • Georgia will realize even further economic benefit from direct government revenue following the transfer of ownership from ADC to the government at the close of the concession period. The U.S., the U.K. and the E.U. have also recognized the strategic geopolitical importance of the Anaklia Port Project in strengthening Georgia’s economic position and to build a barrier against undue Russian influence in the region. Anaklia Deep Water Port will be capable of handling larger container ships than any other port in Georgia. ADC has made considerable progress after being awarded the project in 2016. Since signing the investment agreement in 2016, ADC has • Signed cooperation agreements with strategic peers along the Middle Corridor (ports in Azerbaijan, Kazakhstan and Turkmenistan); • Joined the Trans-Caspian International Transport Route to become a vital part of the cargo transit between Europe and China; • Collected commitments to attract new bulk cargo from Central Asia; • Established cooperation with the Constanza port in Romania to secure the connectivity with the European Union as a major trade partner; • Signed mandate letters with four international financial institutions (IFI) including the European Bank for Reconstruction and Development (EBRD), the Asian Development Bank (ADB), the Asian Infrastructure Investment Bank (AIIB) and the US Development Finance Corporation for debt funding of USD 400 million. • Selected Eiffage, one of the largest European construction companies, as the general construction contractor. Eiffage will provide the construction of the first phase for Anaklia Port together with local and international partner companies, Dutch ABB and Georgian CRP; • Appointed SSA Marine, a major U.S.-based international port operator, as terminal operator; • Selected ZPMC of China to supply electrified rubber tired gantry (eRTG) cranes, and Hyundai Samho Heavy Industries Co., Ltd of South Korea to provide Ship to Shore (STS) container cranes. ADC has carried out site development work at Anaklia – dredging 5 million cubic meters of sand from the harbor and used it to build-up and level the land in the port area. This work was carried out by Van Oord Dredging and Marine Contractors BV of The Netherlands. Drainage systems have also been installed. Altogether, site development work also included construction of a 2.5km irrigation channel and inner roads, transfer of existing communications lines, geodetic surveying and waste removal. Dredging and site preparation work was undertaken following comprehensive environmental impact studies and permitting approvals. 4 ADC has also been focused on recruiting additional western investors to join the project. As Georgia turns its attention toward rebuilding the nation’s economic strength in the wake of the Covid-19 health crisis, two vital ingredients of a strong economy — foreign investment and major infrastructure projects – naturally come to mind. While the global pandemic has created severe nearterm economic distress in Georgia and around the world, there remains continued expectations that trade will recover, and the commercial viability of Anaklia Port remains. The Anaklia Deep Water Port can drive Georgia’s economy for decades, and it continues to be seen as the most important infrastructure project to generate prosperity for the nation.